Landscape architect brings big ‘G’ green to landmark rooftop in Scarborough
The outdoor amenity area at Joy and Love Condos, Gemterra Development’s new project near Kennedy and Sheppard in Scar-borough, is more than a pretty green space above the pool and fitness area. Thanks to MBTW Group, a leader in urban design and sustainable landscape architecture, the colourful rooftop terrace is among the first in the GTA to blend function and form, meaning it not only adheres to City of Toronto green roof environmental standards, it also serves up a gorgeous venue for residents to enjoy. “You normally see a green roof in isolation, in an area where people can see it and look down on it, but it isn’t very often that they integrate people into it,” says MBTW Group principal Christine Abe. The Joy and Love Condo roof, on the other hand, features walking paths, lounging areas and seats for dining, encouraging people to use the space as well as take in the view.

According to the City of Toronto Green Roof Bylaw, buildings applying for development permits after April 30, 2012, must provide a green roof of a specified size that incorporates cool building materials, collects and reuses rain water, and complies with additional codes established by the city. As a minimum, a green roof is required to have a root repellent system, drain-age system, filtering layer, a medium for growing plants and a waterproof membrane, for example. From the start, Gemterra was clear about its plans to use the required green roof as a peaceful outdoor dining and recreation area too. “They wanted it to be something that residents could really resonate with, so they could sit out there and feel like they were sitting in a meadow,” says MBTW associate Gus Maurano, the landscape designer who led the project. The resulting garden is lush, full of vibrant colour and features plants of varying heights. Unlike other green roofs, which tend to focus on low-lying, drought-tolerant ground cover that hovers at two to four inches, plants featured in the Joy and Love Condo green roof are varieties you would use in your own garden at home. “We have this beautiful colour and variety of material that is growing, in some instances, in four to six inches of soil, which is amazing,” says Abe, noting that using minimal soil is part of the green roof design. Not only does the terrace use green roof technology to beautify the space from a landscaping perspective, it also delivers “big G” green benefits as well, she added. Water is collected in a cistern and used for irrigation, for example, and the urban heat island effect is reduced by incorporating light-coloured materials that reflect sunlight away from the building. The trick, said Abe, is to make something attractive while adhering to stringent standards. “Whereas a roof used to be just gravel and patio pavers, it’s now being trans-formed into this green living space that wasn’t there 10 years ago,” she said. “It really is transforming what the city is going to look like with these rooftop terraces:’

The Joy and Love condos adhere to City of Toronto green roof environmental standards while also serving up as a venue for residents to enjoy. 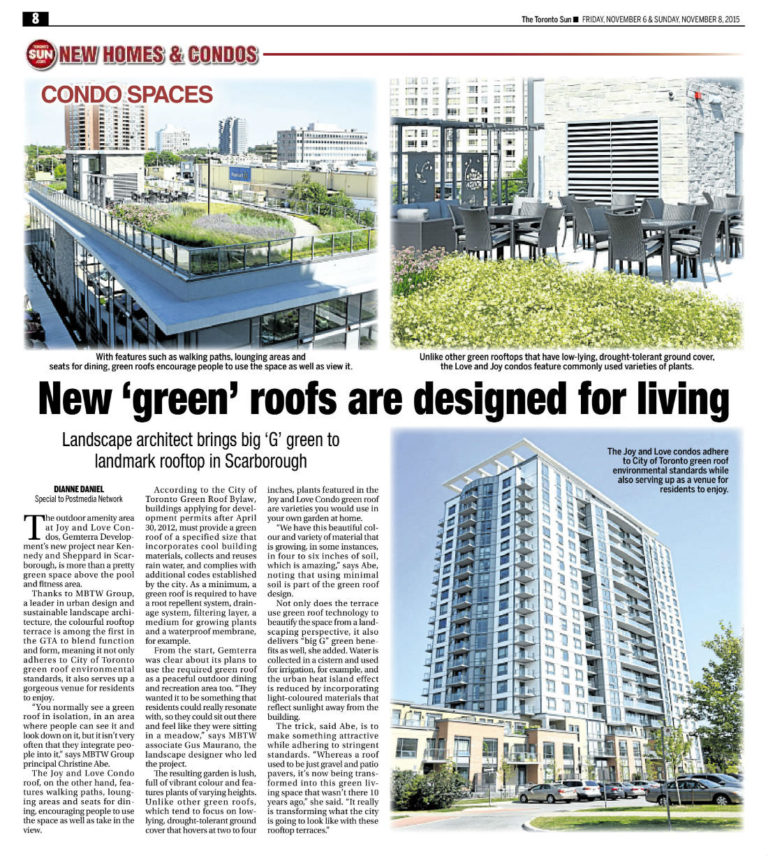